LittleMan V requested that we put his collection on the blog, so here it is.

We give V rewards whenever he does good in school (he was perfect in all his dictation sheets in class and passed school entrance exam), and he would always ask for toys and on that particular toy store trip he was looking for the Trash Pack toys but it was not available.  Good thing it was not available!

Daddy came home one night with the Skylanders PS3 Starter Pack and from then on Vs collection has reached to 30 characters.  He’s watching videos and reading about them. He made a video about them which I recorded using my iPhone.

We followed Skylander gamers on youtube and he learned about the Electronic Entertainment Expo (E3) and asked us to go the expo. He felt really bad when he learned that those who went to the expo got limited edition Skylander characters. I told him that one of Mama’s friend was in the E3 expo, both V and Dad exclaimed that Mama has cool friends. I even became the coolest Mom when I told him that our twitter Dahlink Nick got a Limited E3 Skylander character. V asked if he can visit Uncle Nick and get to see his Skylanders Bronze Hot Dog E3 Release.

Before I got a chance to ask Nick if we can see his Skylanders E3 release I got a message inviting us to drop by his office for some E3 goodies. So we did right after Vs graduation, and we were in for a big surprise. 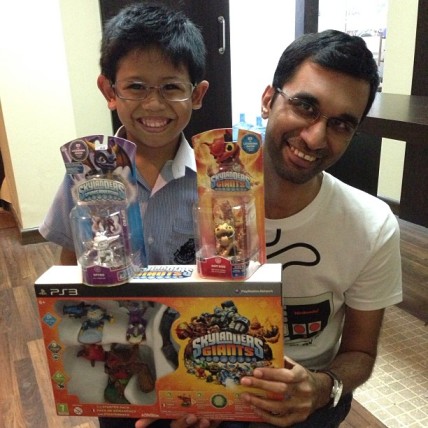 Uncle Nick handed him goodies from the expo and also gave V two Limited Skylanders E3 release – Silver Spyro (E3 2012) and Bronze Hot Dog (E3 2013). He was beaming with happiness and declared to his Dad that Uncle Nick gave him the best gift of his life.  THANK YOU Uncle Nick!

V’s friends declared him the coolest!