I won Mama! For the first time I won! 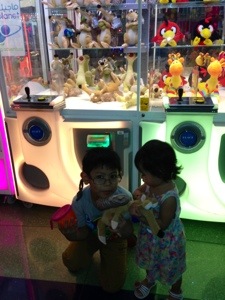 Beaming with delight with a screaming LittleMiss beside him.

After the claw game drama which broke Vs heart, I was hesitant to make him play again but he would insist every time we see one.

I finally gave in when he insisted that he wants to do it for his LittleMiss. He maneuvered the claw from left to right and finally settled above the toy pressed the red button. Viola! Claw grabbed the toy and dropped it.